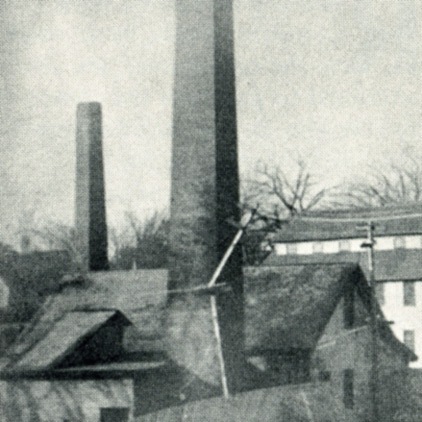 When Taunton Municipal Lighting Plant (TMLP) began operating as a municipal electric utility in 1897, it already had 15 years experience providing electricity to customers in the business section of Taunton.

TMLP’s predecessor, the Taunton Electric Lighting Company, was created as a business venture by several Taunton entrepreneurs who provided the funding for a 100′ x 75′ wooden structure on Mechanics Lane which contained a 60-horsepower engine, boiler and dynamo machines to illuminate 35 to 40 lights in the Main Street/City Square area.

Service began on a small scale, with 22 customers with one, two or three arc lights. Electricity was available from one hour before sunset until 10 p.m. each night except Saturday when electricity was provided until 11 p.m. By September 1892, 18 stores around the Green had electricity and streetlights were lit on Broadway, Main Street and City Square.

Taunton Electric Lighting Company made it possible for the first electric cars to start service from the Green to Whittenton and back on April 30, 1893. Service was later extended to Weir Street and back. By then, the company was generating enough power to illuminate 84 streetlights and 2000 incandescent lights throughout the city.

The city of Taunton came to the rescue in 1897, and decided to purchase the floundering company, making it a publicly-owned electric utility. In June 1897, the city of Taunton purchased the electric light company for a total $125,000.

Renamed Taunton Municipal Lighting Plant, the utility continued to generate power at the Mechanics Lane Service Station. The Mayor appointed a Board of Commissioners to help govern the utility. By 1918, TMLP was in financial disarray due to the lack of a permanent manager or commission. With the insistence of the Taunton Central Labor Union and the Taunton Chamber of Commerce, the state legislature passed a bill that created a three-person commission to oversee TMLP. Governor Calvin Coolidge signed a bill establishing the Taunton Municipal Lighting Plant Commission in April 1919.

Today, TMLP provides electric service to 34,000 customers in Taunton, Berkley, Raynham, and sections of Dighton, Lakeville and Bridgewater. TMLP is governed by a three-member Board of Commissioners, which is elected by the citizens of Taunton.

TMLP employs 165 associates and has an office location at 55 Weir Street and the Cleary-Flood Generating Station at 1314 Somerset Ave, Taunton, Massachusetts. The Generating Station, which has two units (#8 and #9), is capable of generating 136 mW. Unit #8 burns fuel oil (#6), and Unit 9 is a combined-cycle unit that burns natural gas and #6 fuel oil.

In late 1997, TMLP began offering Internet service for its customers as TMLP Online. TMLP Online today provides Internet and network service to residential, commercial, industrial, and municipal customers in the area, including the entire Taunton school system as well as Morton Hospital and its associated medical facilities.

TMLP and its associates are active members in regional and national organizations such as the Northeast Public Power Association, American Public Power Association and the Municipal Electric Association of Massachusetts. Locally, our employees sit on a number of Boards and participate with civic organizations including the Taunton Chamber of Commerce, Taunton Area School to Career, Taunton Boys and Girls Club, Rotary, Project Best, United Way and American Cancer Society.